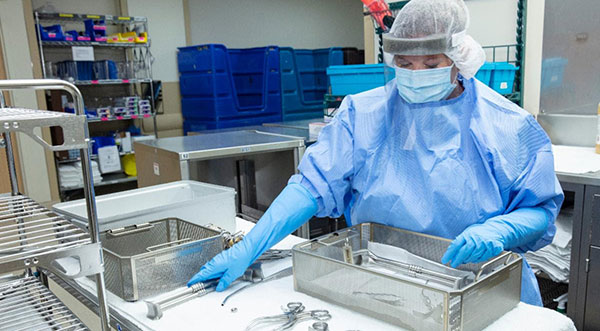 The medical industry is developing every day thanks to the evolution in technology. The important procedures which are followed in this industry are sterilization and disinfection. There are many tools and accessories used in the surgery or any kind of treatment and there are chances that some of the instruments need to be used for everyone. Hence it is important to disinfect and sterilize for every new patient. Many of you must be thinking that sterilizing is as similar as cleaning. With cleaning, you might be simply washing the instruments but when it comes to sterilization or disinfection you would need to make sure it is completely free from the microbes. The sterilization process helps to get rid of all kinds of microbes from the instruments.

There are various other benefits that one can get with the sterilization process such as eliminating blood, foreign particles, and any kind of dirt. It also helps to decrease the bioburden which causes the decrease in non-sterilized bacteria on the living surface. Sterilization also helps to prevent the corrosion of expensive tools. The steps that involve the whole process are Cleansing, Disinfecting, and Sterilizing. There are various methods of sterilization and tools such as Atomic Spectroscopy Instrumentation depending upon the type of instruments. Here are few methods of sterilization which many of the medical institutes follow.

Here comes the first method which is generally followed in the process of sterilization. Here they use steam sterilizers which are also known as autoclaves. This method is known to be the cheapest one hence it is the most preferred method by many. But it is not advisable to sterilize medical devices or instruments which are made of heat-sensitive materials. In this process, the steam sterilizers apply a lot of pressure as well as heat to kill the microorganisms present on the particular object. It is important to expose all the parts of instruments for the best sterilization results.

In this method, they use various chemicals to sterilize the medical devices and instruments. Some of the chemicals which are used in this method are Ethylene Oxide, Ozone, Bleach, and Hydrogen Peroxide. These chemicals help to destroy the pathogens but at the same time, they could be harmful to humans as well. Hence it is important to submerge the equipment into the chemical solution completely till the time it destroys the bacteria. Once the process of the sterilization is finished you would need to wash it and let it dry completely. This method is not suitable for fiber optics, biological materials, and high heat-sensitive materials.

If you wish to sterilize the medical devices which cannot take the steam to kill the bacteria then you can consider going for the dry heat sterilization method. Dry heat sterilization is known as the slow technique which needs a high temperature as well as time. It generally uses air of approximately 340 degrees F to destroy the microbes.

With Plasma Gas Sterilizer you would need to use the low-temperature hydrogen peroxide gas plasma to kill the microbes. This method is generally used for most medical equipment, dental equipment, virus, fungi, and bacteria. It helps to sterilize the enclosed chamber and assures you total sterilization of the equipment. The two important components used in this method are water and oxygen. It is known as the safest for the environment as well as for humans but is expensive as compared to the other one.

Sterilization with formaldehyde gas is suitable for instruments that cannot tolerate high heat. In this process, the air gets removed from the chamber first and then the instrument is loaded with the required steam. In this process, the air gets removed continuously and then the formaldehyde is replaced with it. But to follow this method you would need to make sure the humidity level of the surrounding is between 75% to 100% and the temperature should be leveled between 140 degrees and 176 degrees F. Generally, most of the institutes do not follow this method due to the smell and the overall complex process.

Using the Services of a Healthcare Outsourcing Company

CBD Oil For Your Furry Friends: 5 Amazing Benefits of CBD for Pets

How To Choose An Addiction Recovery Center In 10 Easy Steps?