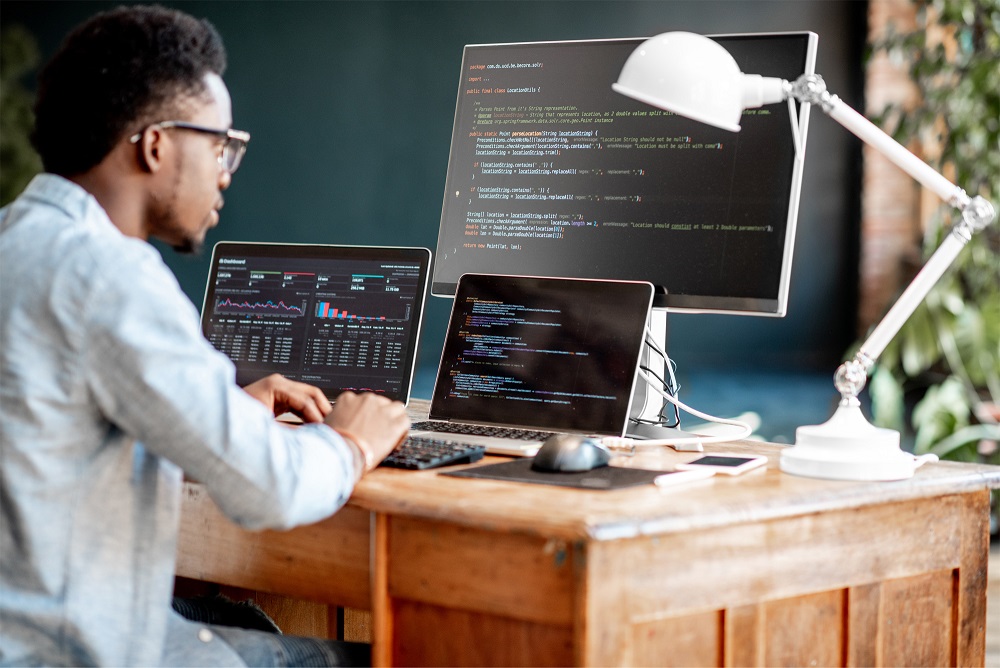 Containerization has become a common practice in the fast-growing high-tech world today. Software developers need to run and share software and applications. This is where the requirement for containers comes in. Docker Hub is a widely used platform for this purpose because of the numerous features it offers to enable robust containerization. Read on to learn more about containerization and gain a deep insight into how Docker Hub and Docker Registry aid in this process.

There are multiple functionalities required to run an application or software. Containerization refers to the process of keeping together all these functionalities in a package or container image. It is used to carry all the dependencies such as libraries, back-end code, and frameworks needed to execute software. It is a portable medium that can run on any platform. Moreover, containerization enables virtualization at the operating system level. This means that it eliminates the need to allocate RAM memory. This is where Docker registries and Docker Hub come in.

A Docker registry is an open-source platform that enables users to distribute Docker images. It consists of several features. There are numerous repositories in a registry which can be public or private. Each repository can hold images that are tagged. Tags are used for easy identification of Docker images.

Docker registries give better control to users by keeping all images in an organized way under one umbrella. Thus, developers can manage their containers and also oversee the development cycle in a centralized platform. Furthermore, a Docker registry is important because it keeps in check where and when the Docker images are being stored. It allows developers to integrate image storage and distribution in their workflow.

A Docker registry makes it possible for users to build containers automatically. This serves as an essential tool for users because it saves a lot of time that would have gone into it if done manually.

Docker Registries are also good for robust containerization because it enables better and highly secure integration with the CI/CD pipeline (Continuous Integration/Continuous Delivery). This refers to the automated process or steps that the software undergoes for its delivery and release. Hence, a Docker registry contributes to improved containerization by providing a good and timely software delivery.

Moreover, a Docker Registry can also allow caching, which means it makes the users capable of applying caching on the builds under an automated process. This means that it will automatically pull images onto the repositories for caching. The purpose of this is to make the builds happen faster.

There are many registries available such as Quay, Google’s container registry, Amazon’s Elastic Container Registry, etc. However, Docker Hub is the official Docker registry, and it plays a significant role in enabling robust containerization.

As you install Docker, it has Docker Hub already installed. It is a cloud-based service that holds over 100,000 images that individuals can share and store. It is associated with a variety of other platforms and sources to provide Docker images, such as independent software vendors, container community developers, and other open-source projects. Developers can pull container images from these sources and even from Docker’s own library. In addition, users can also access code directly from other platforms such as GitHub and BitBucket.

Moreover, features such as webhooks add to the convenience that Docker Hub has to provide. Webhooks are features that allow Docker Hub to integrate with platforms. As a result, teams and organizations can work easily. Individuals can work in multiple teams and share their work over the platform with various organizations. Developers also have the control to restrict or allow access to their repositories and containers.

Docker Hub allows users to opt for a free user plan to get used to the service and its features to ensure it is best suited to their development requirements. Furthermore, containerization requires a certain level of security, so Docker Hub has built-in security features like the multi-factor authentication system to keep repositories safe. Adding on, it consists of the autotest feature that makes it possible to test the application once it is built. It automatically stops the push if a test fails.

Docker registry and Docker Hub are effective tools for robust containerization. Not only can containers be built using these platforms, but they serve as good management tools for the software and application developers. The various features add to the user experience and make their job easy and efficient. The Docker platform is widely used today, and it is reported to have around 11 million developers every month.

Complete Yotpo Review and Pricing In 2023