The internet of things (IoT) makes it possible to collect large amounts of data. IoT is making a tremendous impact not only in Software Development firms but also in Entertainment industry.

In this blog, we aim to introduce you to such impacts and the significance of the IoT in this industry.

According to the facts, it is estimated that the utilization of IoT would rise to $6.2 trillion by the year 2025, in which the contribution of the entertainment industry would be around $2.5 trillion.

IoT Analytics claim that total device connections are going to rise to 34.2 bn. 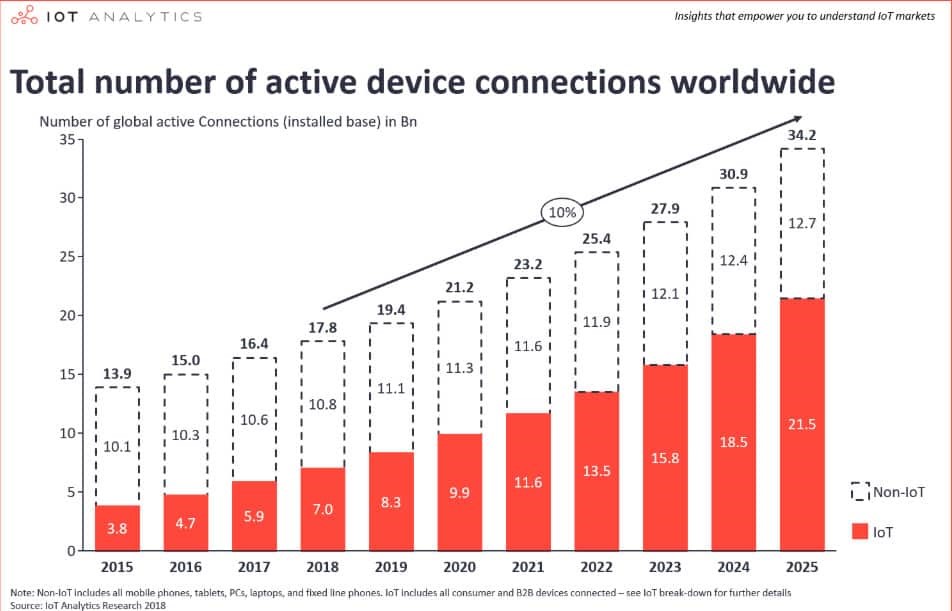 The IoT sensors are capable of producing relevant services that assist advertised and broadcasters so that they can closely target the potential audience. The IoT enables smart devices capable of making proper use of data and process information to track the audience’s behavior and performance.

According to the International Data Corporation (IDC) research, the estimated connected devices will be 30 billion in the market by 2020. By 2020 the economic value of IoT is expected to be around $1.46 trillion. According to Garner, 20.8 billion connected devices and $3 trillion IoT economic value during the same time frame. With IoT devices, entertainment software companies can gather, analyze, and measure information to place their advertisement in front of target audiences.

As we all know the use of big data is impacting the entertainment industry. In the entertainment industry publishers and distributors have been using predictive analytics to plan the content they create attracts a wider audience than before. With the help of IoT, entertainment companies can make decisions about what to make, whom to cast, whom to recommend the content, and how to advertise the content using big data. Internet of Things has made it possible for companies to collect large quantities of data and make the most use of it.

There are many popular forms of entertainment such as music, movies, television series, and interacting video games. Let’s take an example of video games, the traditional gaming has been replaced with mobiles and gaming consoles that make the gaming experience more interactive, and more engaging. Internet of Things (IoT) will make the gaming experience more interactive by using a sensor that makes gaming equipment smarter. IoT in the entertainment industry will diverse user-friendly and customer engaging games via using multiple sensors and hardware equipment.

IoT allows entertainment companies to execute accurate advertising based on user data and it also gives advertisers a clear idea of what the audience likes. We all know that the amount of data that IoT sensors generate, advertisers, and a broadcaster can create a highly focused marketing campaign that is closely relevant to the target audience. By using the sensor and actuators, IoT can revolutionize the future of entertainment.

How significant is the IoT in the Entertainment Industry?

Just imagine a situation you are on the way to attend a meeting in your office. While you have already moved in a rush from your home, you suddenly realize during your arrival that you have left your mobile phone at your home. Probably, you were trying to cope with that situation, in between, you look at your smart-watch on your wrist. And then you realize that despite having the mobile at home, you can handle the phone operations through your smart-watch and finally you take a sigh of relief. This is done by none other than the Internet of Things (IoT). This advanced technology has emerged seamlessly in the digital era which makes multiple devices connect via the internet. This spectacular technology is so powerful that it could make humans, machines, applications connect and interact with each other with no complex issues.

From cameras to sensors, every module of the entertainment industry has got advanced solutions through the assistance of IoT.  It has caught a steep economical rise with smart enabled IoT devices in the market.

If we talk about advertising efforts in Digital marketing, then the response it provides is absolutely phenomenal. It could provide greater assistance in the advertising niche than what we had in the last 5 years in the market.

Building user-specific campaigns is another advantage of IoT that eventually helps marketers with a fine quality experience.

To sum up, we can observe that numerous businesses including small and mid-sized organizations are taking further steps to adopt the IoT technology in their premises for smooth day-to-day operational activities. The advantages of IoT are several for different industrial sectors. It depends on the organizations to understand the usage of IoT according to their needs.

Hi, I am Kapil Panchal, working as a Digital Marketing Manager in a reputed Custom Software Development Company. Being a Technical Writing Enthusiast and a goal-oriented individual with honed communication skills, I have years of experience in the Information technology, Services, and Product industry. Having a high-energy level, I absolutely love what I do and I’m passionate about being better every day.

How Can You Master Google Ads Management?