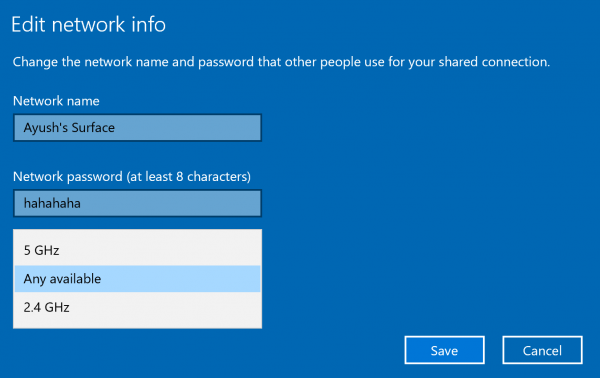 Windows 10 comes with a user-friendly version of broadcasting a WiFi network dubbed as Mobile Hotstop. A WiFi hotspot can broadcast an SSID or Service Set Identifier in two frequencies. They are either 2.4 GHz or 5 GHz broadcast bands. The 2.4 GHz band is comparatively an older broadcast band. It is used by Bluetooth, Microwaves, Car alarms, and others. This means that this band has a longer range but the disturbance from various devices mentioned can create disturbances in the broadcast. This can directly compromise the speed of the network connection.

To counter this demerit, a standard of 5 GHz has been started to be implemented across devices that broadcast a WiFi network. This brings in a smaller range to the broadcasted network but in place, bring almost a disturbance less broadcast band which does not compromise the speed of the network connection at all.

How to change Broadcast Network Band to 5GHz in Windows 10

There is only one way to set the Broadcast band for Mobile Hotspot on Windows 10.

Now from the drop-down options of Network band, select either of the following options:

The Any available option will take account of the power source and battery level, and other aspects to check if it would be optimal to broadcast a network in the 5 GHz band.

Select Save and your WiFi hotspot would be broadcasted at the selected Network band.

If you do not see the 5 GHz option, the radio on your computer might not support 5 GHz broadcast and you would not be able to broadcast your WiFi network at 5 GHz. At such times, you may see a You’re sharing your connection over the 5GHz network band message.

In case your device is broadcasting at 5 GHz but the receiver is not able to see the SSID listed, try to manually add the WiFi network on your receiving device. Toggle the WiFi radio on and off on it.

This should fix your issues.

I hope this article was helpful to you in understanding how to set the Broadcast band for Mobile Hotspot on Windows 10.