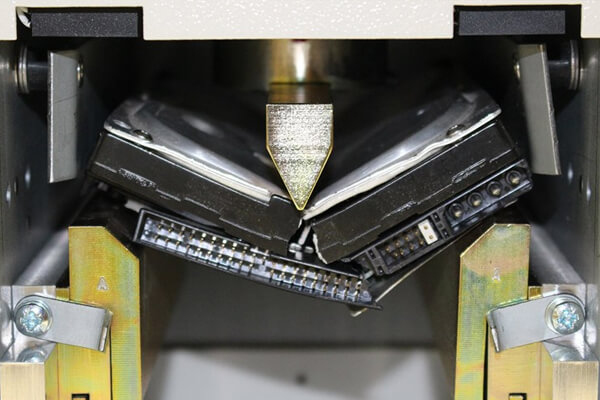 Despite all the newer storage technologies like high-tech SSDs and the rise of popularity in cloud storage, backup tapes still remain one of the most cost-effective methods to store large volumes of inactive data, making it the favorite backup storage approach for many organizations.

The backup tape’s main strength is its storage capacity. A very popular type of backup tape, the LTO (Linear Tape-Open) Ultrium, for example, has just announced its ninth generation in 2020, which now can hold a massive 18 TB of data in just a single cartridge or tape. However, this strength also doubles up as its biggest weakness: since a backup tape is designed to hold inactive data, then maintaining the security and integrity of its data can also be a challenge.

Another common challenge comes when the backup tape is no longer useful. At some point, you will need to destroy the data contained in the backup tape not only to secure the unused confidential data but also to protect the organization from potential legal liabilities and environmental concerns.

Below, we will discuss all you need to know about how to safely destroy backup tapes: the different methods available, best practices, as well as alternative options you might want to consider rather than simply destroying your tapes.

Without further ado, let us begin.

Physically destroying the backup tapes is not the only option. Another viable option is to only “destroy” or erase the data so you can either reuse the tape or sell it for extra cash.

It’s important, however, to understand that the data on backup tape must be securely erased or eradicated before you can sell it, or else you’ll risk facing legal liabilities and you might also risk losing your organization’s compliance to PCI DSS  and other relevant regulations.

If you want to reuse your tape, then you can simply erase, label, and use it as you would with a blank tape. There are various tools that can help with this, and you should start with the tools/platforms provided by the tape’s manufacturer. However, in this case, the erased data might be recoverable, so there’s no guarantee of security.

One surefire way to totally eradicate the data within a tape is degaussing, which is essentially about passing the backup tape through a powerful magnetic field (with a degausser tool). This will rearrange the polarity of particles within the tape, which will ultimately eliminate any resemblance of the previously recorded data, and hence, ensure that data recovery is impossible.

There are several key benefits of using degaussers to eradicate your backup tapes’ data:

However, before you run your backup tapes to a degausser, keep in mind that although there are some tape cartridges that can be degaussed and then reused, most will not, and you’ll need to use a new tape cartridge. This is because most backup tapes will have their “system instruction” data that is on the date also destroyed via degaussing, so the tape will not be recognizable after being degaussed.

If you plan to destroy your backup tapes’ data to sell them, then a viable option is to sell your tape drives to specialist ITAD (IT Asset Disposition) companies.

Not only these ITAD companies can make sure the whole sales process is easier but will ensure a secure and safe data eradication for you. Companies like Big Data Supply Inc. will give you a certificate of data destruction, which will also help in ensuring you can stay compliant with relevant regulations.

If you don’t want to sell or reuse the backup tapes, or if the retention period of the tape has expired, then physical destruction (and preferably, recycling) of the backup tape is your only option.

Degaussing, when done on backup tapes that cannot be used after being degaussed (which is, most of them), can be considered as physical destruction, although there might be parts of the tape drives that can be salvaged/sold for cash.

Degaussing, as discussed, is the most secure and reliable destruction method for backup tapes, so this should be your very first option.

However, if degaussing is not possible and/or too expensive for you, then there are other options you can consider:

Shredding the backup tapes, when done properly is a very cost-effective method to make sure the data contained within the tape is completely eradicated.

However, there are two concerns when shredding your backup tapes you might want to consider:

First, is that when the shredding is not done correctly, for example, if the shredded pieces aren’t short/small enough, it’s technically possible for unauthorized parties to piece back the tape together and recover the data.

The second concern is that shredding the tape will result in the solid waste that is not environmentally friendly. The most cost-effective way to dispose of shredded tapes is via landfills, but even then, it’s still terrible for the environment.

Another fairly cost-effective way (although not as affordable as shredding+landfilling) is to incinerate the backup tapes. After the tape is completely incinerated, it is obviously impossible to recover any data, making this method completely safe.

However, there’s also a drawback with this method: burning your tapes will release chemical materials into the atmosphere, which may be forbidden in your location. Check your local regulations before moving forward with this approach.

Securely destroying your backup tapes is important not only in ensuring the integrity and security of your sensitive information but also to avoid potential fines and other penalties due to breach of regulations.

While it’s definitely possible to destroy your backup tapes yourself with the methods we’ve shared above, we’d recommend using the service of a reputable backup tape destruction service provider or selling your unused tape drives to reputable ITAD companies that can provide certificates of data destruction.