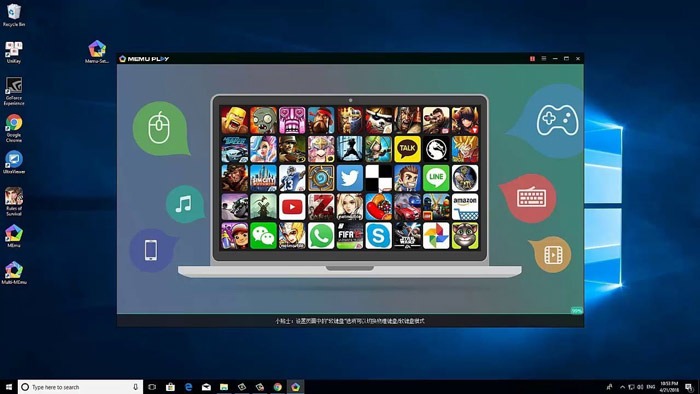 There are many reasons why you might want to run Android on your PC. You could be a mobile developer who is looking to test your apps before making them live, or you may just prefer to play mobile games on a bigger screen. Whatever the reasons, there are tons of ways you can run Android on PC, from using a virtual machine or an emulator to running an Android-based desktop application.

Here are six projects that bring Android to your desktop.

MEmu is one of the best-functioning and best-adapted apps that lets you run Android on Windows 10. Designed with gaming in mind, MEmu does a great job of integrating PC keyboard-and-mouse controls and gamepads into its build of Android, and response times are equally impressive.

It has a ton of functionality, making it easy to sideload apps and games, and a forced minimum window size ensures that the window never becomes so small as to be unusable. The latest version of MEmu lets you run multiple instances of Android simultaneously, so you can play different games on the same account or instances of the same game through different accounts.

Some people may be put off by the advertising, but it’s a small price to pay for one of the smoothest Android emulators out there.

GenyMotion is an Android Virtual Device that runs on Oracle’s VirtualBox software. If what you want is an adoption of the Android OS in its original form, then this is the solution for you.

The features of GenyMotion remain its best perks. It comes packed with over 3,000 different configurations for Android. Also, if you prefer to switch between different screen sizes and resolutions, then you are in for a treat.

Other mobile features such as Wi-Fi, GPS and multi-touch are fully supported.

GenyMotion is free for personal use but comes with a paid plan for commercial use.

This one from Google is another powerful Android-to-PC solution. Like GenyMotion, the Android Emulator operates on a layer inside your PC. It is the native solution from Google for running Android devices on PC, and it does it pretty well.

One advantage of this solution is that it supports links to Google’s Android development, so you can be pretty sure it’s not going anywhere soon. Another big win is that it supports Intel Hardware Acceleration technology (HAXM). This improves the speed of the OS to an almost native feel.

Internet, Wi-Fi, multi-touch, an accelerometer, and many more features come packed in this OS, so you can be sure that you won’t run out of options while using it. Android Emulator is free to use.

BlueStacks is one of the old-time favorites for running Android OS on PC. It is built on native Android, so it is capable of supporting the millions of apps on Google Play. And you can access Play from inside the app.

Unlike GenyMotion and Android Virtual Device, BlueStacks is an application. However, it’s still a virtual machine at its core, so you don’t need to install any other helper application. Just download and run the app. The good thing about BlueStacks is that it is optimized for gaming on your desktop. This means you can play popular games like Final Fantasy X, Clash of Clans, FIFA soccer and PUBG mobile.

The latest version, BlueStacks 3, comes preloaded with optimizations for gaming experiences. Users who love running Android games on their PC are in for a smooth experience. The good news is that it runs on Android Nougat, too.

This Android-x86 OS leverages the power of the open source community to deliver on its promise. It is a full-featured Android on PC, designed to run independently on PC. It requires VirtualBox to be installed and running on your PC, though. 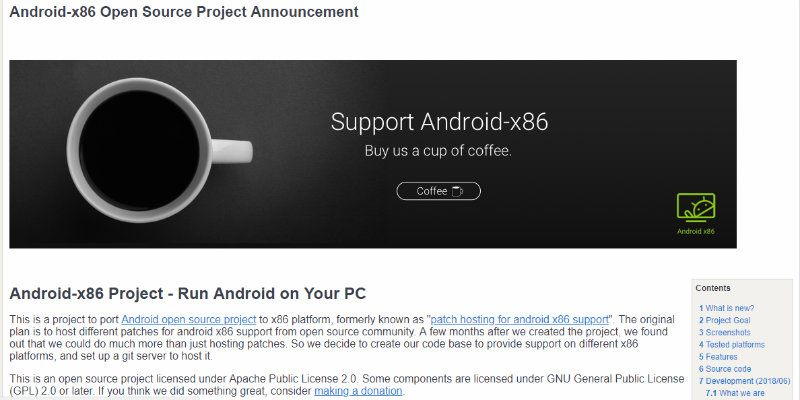 The OS is on Android 5.1 (Lollipop), which is quite behind. However, it is one of the most stable OS available to run Android apps on PC. The open source community touts it as the most stable solution available.

The designers of this app chose to use a wide-screen user interface on this OS, so it feels like using an Android tablet with a keyboard. Another advantage is that it comes installed with Google Play and with clean Android UI. There is no bloatware to clog up space.

If what you seek is a reliable Android-on-PC solution that doesn’t crash often, then this is for you.

Anbox, or Android in a Box, is an open-source Android-to-PC project. The Apache and GPLv3 license covers this project.

Anbox runs its Android kernel in a Linux subsystem sandbox. This project doesn’t have emulation layers, so it does not virtualize your hardware. This feature makes it run fast.

The project integrates with the host OS to give users a feature-rich experience. And it works on both mobile devices and laptops.

The downside of the Anbox project is that it doesn’t run on Fedora/CentOs Linux distribution. It works only on Ubuntu and Debian.

Another contender for the top spot is Bliss OS. Started as an open source project, this OS has morphed to become one of the best Android OS available. It is also a true multitasking workhorse.

Bliss OS seeks to be a full-featured Android-on-PC OS and comes with an installer package for dual-booting. This means you should expect to run Bliss as a standalone OS for Android.

It also comes pre-installed with Google Play, so you can access all apps on your PC at will. Unlike some other projects, it is a lot more stable. There are a few crashes but nothing that affects your use.

To Wrap It Up

Running Android on PC is no longer a pipe dream. The seven solutions above are capable of turning your Android OS into a full-featured PC OS. Each solution is suited for different uses. No matter what your particular needs are, there’s something for everyone.