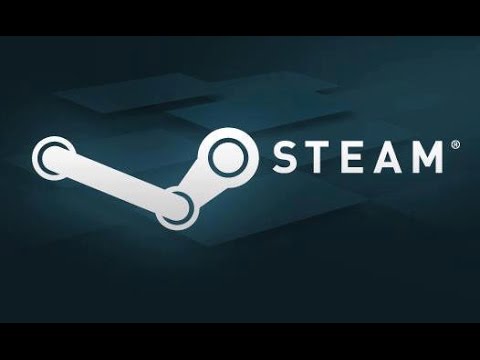 Steam is most PC gamers’ window to the gaming world. Microsoft may own Windows, but Valve owns gaming on Windows thanks to the all-powerful and super-convenient platform. But even the best pieces of software can have their bad days, and Steam – being the complex beast that it is – could fail to open for you for any number of reasons.

Here we run through the most common causes for Steam not opening on your PC and our solutions. For Reset Steam Password.

Let’s start with the simplest solution, which is to run Steam as a system administrator. This will ensure that there aren’t any security or permission issues somehow blocking Steam from opening or from certain games in Steam working properly.

On the one hand, you can simply right-click the Steam shortcut on your desktop and click “Run as administrator.”

But if you want Steam to always run as administrator, you can go to your Steam install directory (“C:Program Files (x86)Steam” by default), then right-click the Steam executable and click Properties. 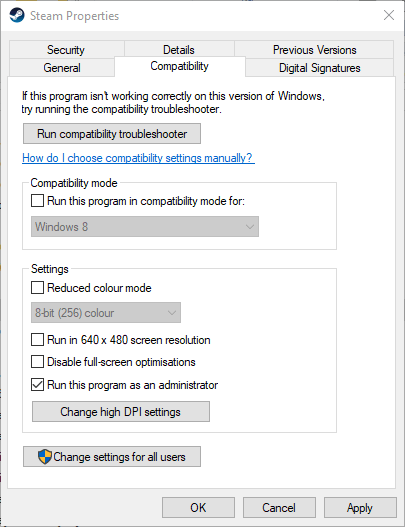 Next, tick the box that says “Run this program as an administrator” and click OK. Steam will now always run as admin until you come back here and untick the box.

Update (or Roll Back) Your GPU Drivers 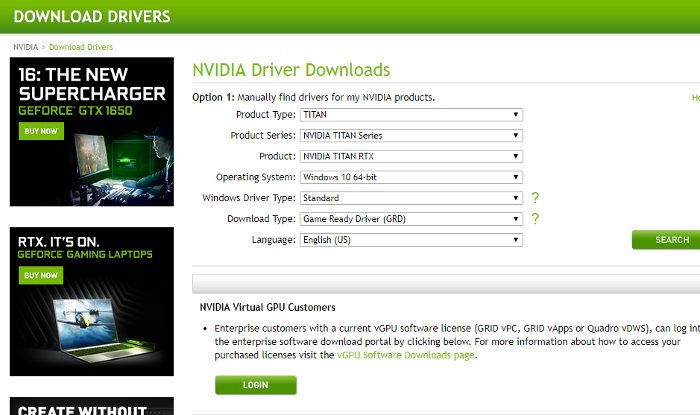 One of the known reasons for Steam crashing on startup is related to GPU drivers. Over the years there have been several GPU updates on both AMD and Nvidia’s side that have caused Steam to not work properly, and it’s possible that some freak occurrence during a GPU update has caused it to stop playing nice with Steam.

Updating your GPU drivers should be a simple process done either through GeForce Experience (Nvidia) or Radeon Settings (AMD). Simply “Check for updates” in either app, then download the latest driver.

To roll back a GPU driver, you’ll need to go to the official Nvidia driver or AMD driver pages, then track down and download a version of a driver just one or two behind the one you’re currently using.

You may not realize it, but the Steam desktop client actually uses Chromium, the lightweight open-source version of Google Chrome that works in much the same way. That means Steam can subject to the same errors as a regular web browser, including the dreaded Error Code: -107, an SSL protocol error. 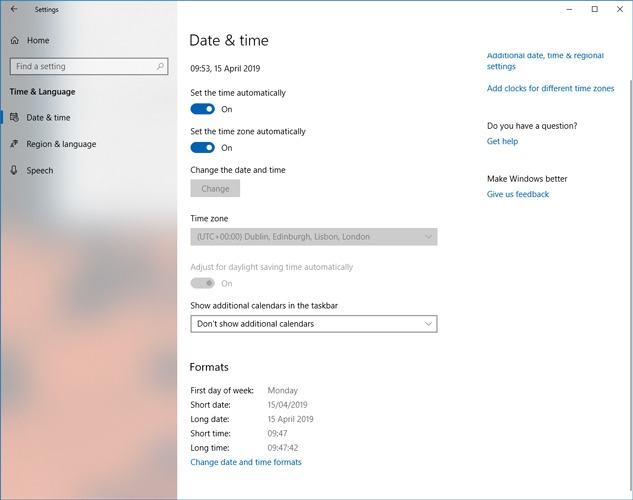 The solutions to this can be quite simple: first, make sure you’re on the latest version of Windows. Next, go to your “Date & Time” settings in the Windows Settings app and toggle the two options to “Set time automatically” off and then on again.

Another possible solution for this is to delete the beta client file and return to a stable Steam build if you’re not already on it. This leads us to the next point.

If you are running a beta build of Steam, or indeed if you’ve run a beta build of Steam at any point in recent memory, then you always run the slight risk of Steam not working. Beta builds are, after all, less stable than than full ‘stable’ builds, which is the price you pay for getting to play around with the latest features. 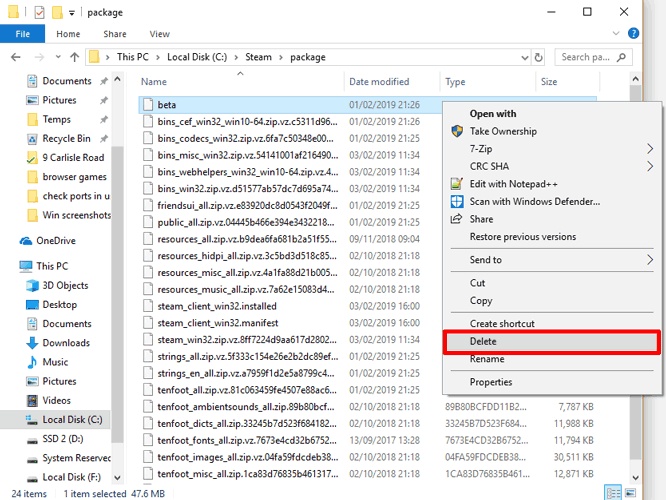 So if you’re in this situation and Steam isn’t starting, you need to disable the beta client without actually going into Steam. To do this, go to the package folder in your Steam directory (C:Steampackage by default) and delete the file called “beta.”

One of the more common problems on Steam is the dreaded Steamui.dll error where Steam fails to find the DLL file it needs to open. There are a few possible solutions to this.

In a reversal of our previous tip, you can trick Steam into thinking the current version of Steam you’re running is a beta. To do this, go to your Steam installation folder (“C:Program FilesSteam” by default), then find “Steam.exe.” Right-click it, then click Create Shortcut.

Right-click the shortcut, click Properties, and then in the Target box add -clientbeta client_candidate to the end of the target directory. So in my case the whole box will read: 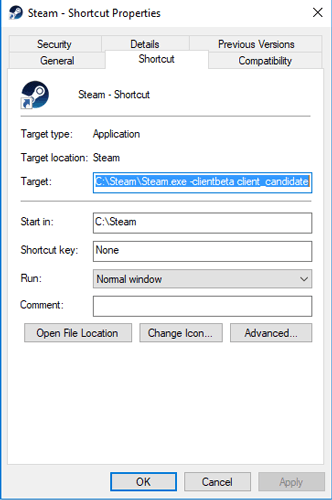 Use this shortcut from now on to run Steam, and you should be fine.

The “appcache” folder in your Steam directory stores various data about your Steam apps and setup. Essentially, it remembers small details each time you open Steam, ensuring that the next time you run Steam things will work that little bit faster. Things can go wrong with the cache however. It can “misremember” things, which may be a cause for Steam not opening.

To fix this, try deleting the “appcache” folder. (Don’t worry, this will be recreated next time you open Steam.)

First, go to your Steam directory (“C:Program Files (x86)Steam” by default), then copy and paste the appcache folder to a safe location (just in case). 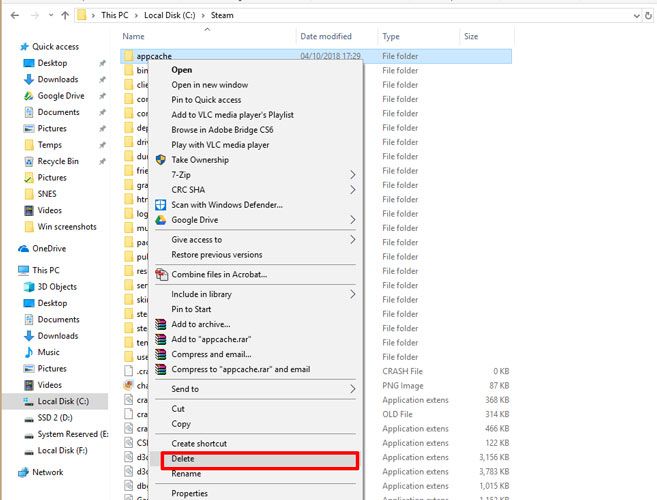 Once you’ve done that, you can delete the “appcache” folder in your Steam directory, then try starting Steam again. If it works well, you can then go and delete the original backed-up appcache folder, as a healthy new one will have been created in its place.

Check Whether the Steam Server Is Down 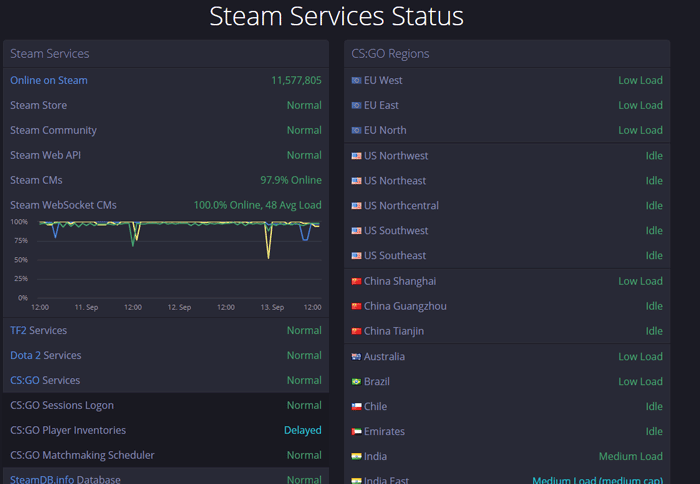 When stuff goes wrong the instinct can make you want to tear your hair out, curse your luck, and begin looking for tough, techy solutions to what you believe must be a terrible, potentially fatal problem with your PC.

Don’t do that. The very first thing you should do is check whether the Steam servers are down – which can happen when there’s maintenance or some kind of problem that causes an outage. The best site to do this, wherever you are in the world, is Steamstat.us, which gives detailed info on server loads, which servers are up, and so on.

Go to this site and see if your regional server’s having issues. If it is, you may just have to wait it out. If not, read on.

Nothing Happens When I Try to Open Steam

Steam is split up into a few separate processes on your PC which helps it run nice and smoothly. Sometimes when you try to open Steam, it may cause a minor error whereby the process starts on your PC, but Steam doesn’t actually appear on your desktop or notification area. You try opening it again, but literally nothing happens.

This could be because the Steam process has started, but the part that deals with showing the Steam UI hasn’t. If this happens to you, hit Ctrl + Shift + Esc. In the Task Manager click “More details” at the bottom-left if that’s not been selected already, then scroll down in the Processes list until you reach “Steam – Steam Bootstrapper, Client Service, WebHelper” and so on. Right-click all Steam processes you see here and click “End task.” 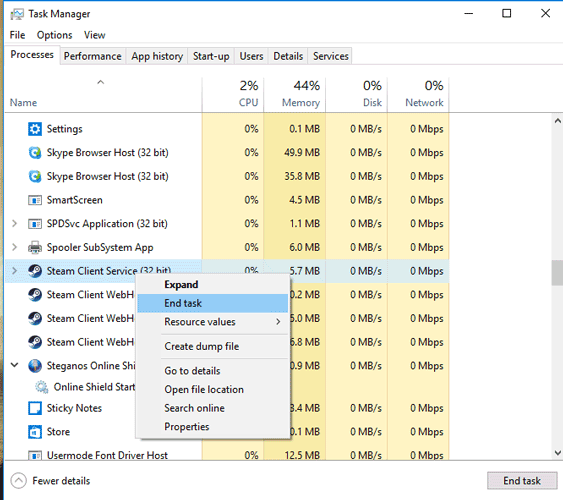 Once no more Steam processes are open, try opening Steam again and it should work.

Or Do the Quick Reinstall Trick

If all that fails and your Steam still isn’t opening, there’s a quick way to reinstall it while keeping all your preferences and games intact. In your Steam installation folder delete everything apart from Steam.exe, steamapps, and userdata. Next, double-click “Steam.exe” and let it reinstall. (If you want your new Steam folder to be installed elsewhere on your PC, you can move Steam.exe, steamapps and userdata to another location before you do this.)

Let Steam do its thing and reinstall, and you should be up and running again with all your precious games and Steam settings still there.