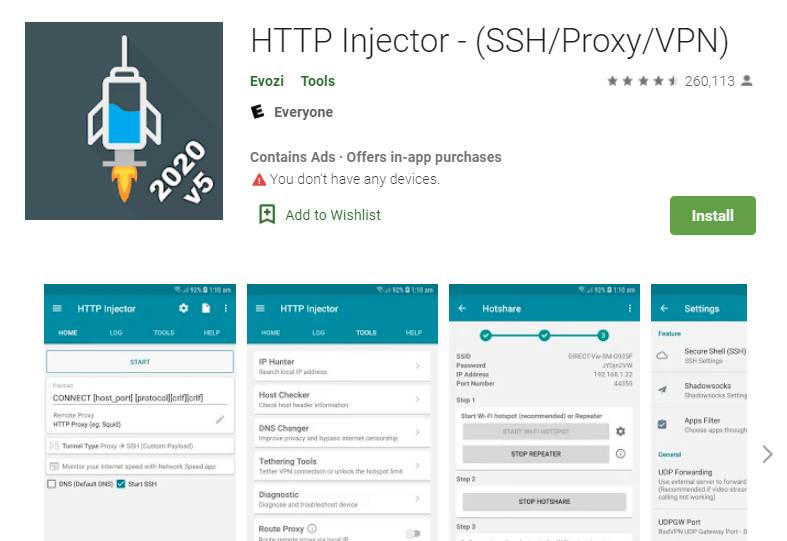 The HTTP injector is a top-rated VPN application that is widely used by a lot of users to secure their online footprint. The ​Http Injector app is mainly used mainly for unblocking a variety of websites that are blocked in your country. It can unblock websites that are blocked by your network service provider. It is one of the professional apps that include SSH, VPN, Proxy, and things like that.

The HTTP Injector also includes some essential tools such as Host Checker, IP Hunter, Tethering Unlock, IP Checker, Payload Generator, and much more. These tools can help you to import or create the configuration on your device. Such large arrays of tool make it one of the versatile tools that you can use for network unlocking. The Http Injector is typically available for Android devices. There are no other official versions of the application available for the other operating systems like iOS and PCs. In this article, we will let you know about some of the alternative of the HTTP injector for iOS that you can use.

Can you use the Http Injector for iOS?

As we said earlier, the HTTP Injector app is only made available for Android-based smartphones. The developer of the app, Evozi didn’t deploy any version of the application for the iOS devices yet. However, you may use the application using the android simulators available for the iOS devices. Currently, there are lots of android simulator apps available for iOS devices.
In case you don’t know – the simulator or emulator lets you run any android program on your iOS devices by producing a virtual android environment on your iOS device. That means you will create a portable android environment on your device by using the emulator. Some of the popular Android emulator for iOS includes iAndroid, GBA4iOS, NDS4Ios, iNDS, Alien Dalvik Emulator, etc.
You can download the emulator from google. Make sure to follow the included guideline for installing as some of the emulators can be quite tricky to install. You will require Cydia to run the emulator on your iPhone or iPad.

Alternatives of the Http Injector

There are no other applications that can offer you professional-grade service like the Http Injector. Especially, the tools it includes cannot be found in the other apps. However, if you only require the Http Injector for unblocking restricted websites, then there are a lot of apps available for this purpose. Below, we will let you know about some of the best apps that you can use on your iOS for unblocking sites.

The Hotspot Shield is one of the best VPN services available on the internet currently. It is a cross-browser application available for the android, iOS, and also for PC-based operating systems officially. It is also one of the most used Virtual Private Network currently. If you want to unblock geo-restricted websites, then it will be an excellent alternative of the Http Injector.

OpenVPN Connect is another versatile VPN service that you can use instead of the HTTP injector. The VPN service uses cutting-edge technology to secure your internet browsing and overall online footprints. It has an extensive range of servers around the world to ensure a smooth browsing experience.

The VPN Wi-Fi Hotspot can be another excellent alternative of the HTTP Inject to ensure safe internet browsing. It has an elegant interface with multiple servers around the world. The VPN Wi-Fi Hotspot can be a great way to stay safe while browsing the public Wi-Fi network. Though the ​HTTP Injector for PC is not available, you can use it with an android emulator. Or, you can rely on the mentioned alternatives of the app.